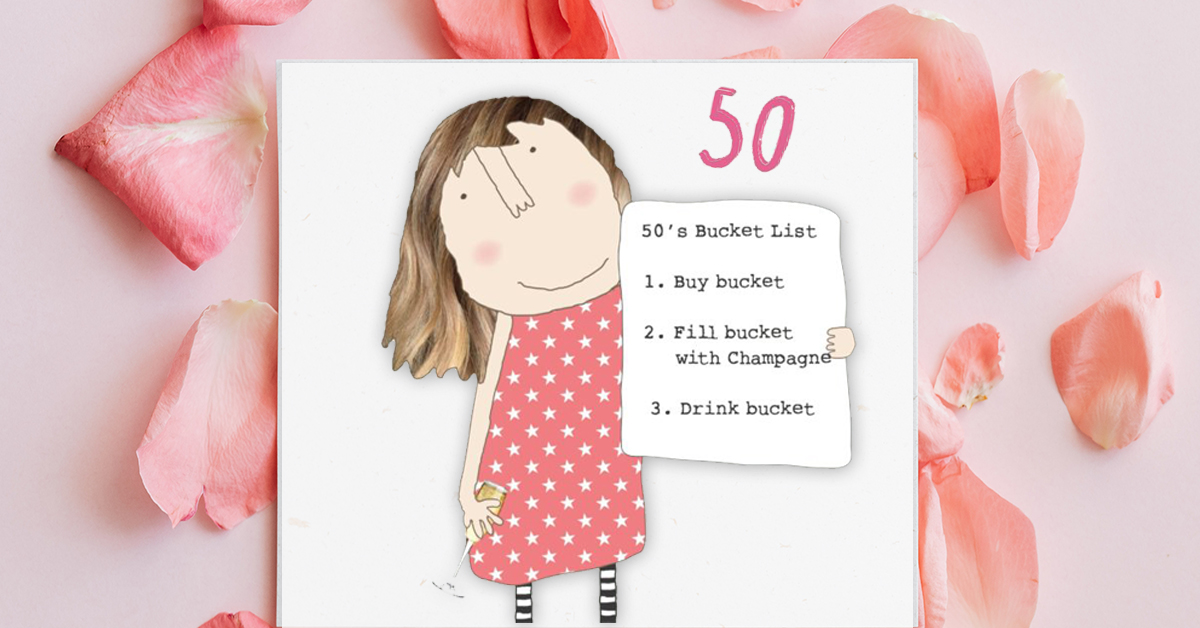 “50! Nifty! United States! From the 13 original colonies!” The fact that I can still name all 50 states in alphabetical order from learning that song in 5th grade is one of my crowning achievements. You’d be surprised at how often this knowledge comes in handy. It has proven much more useful than calculus or the innards of a frog.

I don’t want to be 50 years old. I’d been flippantly referring to myself as 50 all last year, lulled into complacency by the secret nugget that I was still “in my 40s.” Turning 50 feels unfair; traitorous, even. Like, in no way did I agree to this. I want to speak to a manager.

50 Cent is the first thing I think of when I hear “50.” He’s still my husband’s ring tone. See? We are hip, dammit. Old people don’t immediately think of rappers! You may not find me in Da Club, but bottle full of Bub? Check.

I always assumed that, by 50, I would have old hands. I dread the day I look down and see old hands. It is inevitable. The women in my family show their age through their hands; gnarled, swollen knuckles with paper thin skin over blue veins. Yellowed nails that are weirdly shaped, neither squared off nor rounded. To me, they evoke witches’ claws. More than anything, I am relieved that my hands aren’t showing my age, yet.

50th celebrations unnerve me this year. Turns out, I was born the same year as the original Walt Disney World theme park in Orlando. Also, NASDAQ, AmTrak, FedEx and NPR Radio. These things have always existed. We cannot be the same age.

At 50, I don’t like my body. I don’t remember a time when I did. We are at war, the two of us. We have done miraculous things together. We have betrayed each other in our greatest hours of need. I look back at photos from earlier decades and wish that we’d come to an understanding sooner. That we’d accepted each other for our strengths and failings. Is it too late?

Jim Morrison died 50 years ago at age 28. Tupac Shakur was born 50 years ago and died 25 years ago at age 25. I look up famous musicians born the year Tupac died. They are mostly YouTube stars. That tracks. They seem so much younger. I wonder if it is because I’m old or because people ARE younger at 25.

“You’re 50! Welcome to your golden years!” My AARP card pisses me off. I am not old enough for an AARP card. Yes, people are younger these days. I am proof. I don’t have old hands, yet. I don’t even need bifocals.

Turning 50 means an unguarded glance in a mirror causes a whiplash-inducing double take. “Who is that woman?” When people say you don’t look 50, they are being kind. You don’t look 30, either. You are no longer in that coveted “Adults 18-49” demo that you sold when you worked in cable ad sales. True, you are still in the “Adults 25-54” demo, but you are so close to the dreaded 55+ demo that it is a shock akin to a bucket of cold water. You used to talk about that demo for CNN; you referred to them as the “elderly” or “mature” buyers who had pension income and time to watch cable news 24/7.

When my grandfather turned 50, he chose to take early retirement from PanAm and was welcoming his first grandchild – me. I was the first girl born in the Baird family in at least three generations. I was celebrated until my brother showed up. Then there was relief that there would be an heir to carry on the Baird name. I still don’t know how to feel about that.

When my mom turned 50, she had both her children’s weddings in one year. She and my father moved from the family home they’d built when my brother and I were preschoolers to a condo on a lake. They referred to it as their retirement home that they were “preparing for grandchildren” which, incidentally, they were blessed with in just six short years. They bought a boat.

At 50, I have a 5th grader. He is the youngest of three boys. I am an active volunteer for the grade school PTO, the middle school fundraiser and the high school baseball team. We just bought the 16-year-old a car. I feel a niggle of panic at the base of my skull every time he arrives home even minutes later than he said he would. If I have to prepare for grandchildren, things will not have gone to plan.

50 years ago, the pocket calculator and the Floppy Disk were introduced. My kids know the Floppy Disk as the “Save” Icon. The calculator is now on their phones. I hear echoes of my 10th grade math teacher’s lecture that we had to be able to solve for “X” because we wouldn’t always be walking around with a calculator in our pockets. HA!

At 50, there are many paths I chose not to take that are now closed to me. I never studied abroad. I never moved for my job or on a lark. I never had a one-night stand. I never tried any hard drugs. I did not pursue the career I really wanted. I did not kiss a girl when the opportunity presented itself. I did not take the path less traveled. I have many regrets as I stare at the faded markings of these possible detours in my rearview mirror.

The Pentagon Papers will turn 50 this year. It is also the anniversary of the 26th Amendment. I had to look that one up. It allows 18-year-old citizens the right to vote. I am heartsick that so much has stayed the same in America. There is still massive corruption. We are still sending mere children off to wars we know we cannot win. We are still grappling with voting rights. My children are not inheriting a world that my generation has made better.

At 50, I am more than slightly panicked that my “to be read” and “to be seen” lists are still so extensive. I am great at making lists. I am not great at completing lists. I will add “work on that” to my current list.

When you are 50, you have as many friends who have divorced as who are still happily married. You have friends and acquaintances who have died; tragically or inevitably, it does not matter. Each instance sets you back. You hear the clock ticking.

50 years old today means you are Gen X. Winona Ryder and Pearl Jam, MTV and Atari, an early childhood often cemented in latchkey kid status and a disaffected worldview that still resonates in movies like “Reality Bites” and “The Breakfast Club.” My “High School Starter Kit” would be Swatch watches, Benetton sweaters, a fake wood-paneled station wagon and music brought to you by movie soundtracks: “Purple Rain,” “Dirty Dancing,” “Footloose” and “Flashdance.” When people refer to the ‘80s as 40 years ago, I immediately reject this fact. “No. That cannot be right.” It is right.

I take measure of where I thought I’d be at 50 versus where I am. There is much to celebrate. I am a great mom. I am a good wife. I am a loyal friend. I am self-sufficient, handy, intelligent, and well-read. I enjoy the consumption of pop culture in all forms, which I am convinced makes me relevant. Do not try to disabuse me of this notion. I am an extroverted introvert who can crush a public speaking engagement and connect one-on-one with most people very easily. I am content with my own company. I love going to restaurants and the movies alone. I am not afraid of people not liking me. I am rarely afraid to say “no.” There are many – most – things about my life that I would not change.

Yet, I am a 50-year-old who must sheepishly admit that I still need to learn basic geography, how to drive a stick shift and why I’m always constipated. I need a diet and exercise routine. I need to drink more water. I need to offer myself even half as much grace as I offer others. I want to learn more about horoscopes and astrology. I want to try another tap class. I want to re-learn French and spend a month in France.

At 50, I know there are still plenty of roads and detours to choose. I am a strange combination of jaded cynic and hopeless romantic. I want to be brave enough to venture down the more challenging paths. I want to publish a book. Books. I want my “Lovey Project” charity to be a force for good in this world. I want to do more; I want to leave a mark; I want to make a difference; I want to have mattered. Don’t we all?

50 is the middle of the dash. 50 is hard, but it’s hard like a diamond. Unbreakable, unchanging; held up to the light, it is multi-faceted and brilliant with possibilities. It doesn’t have to be flawless; it just has to be yours to appreciate and to love.