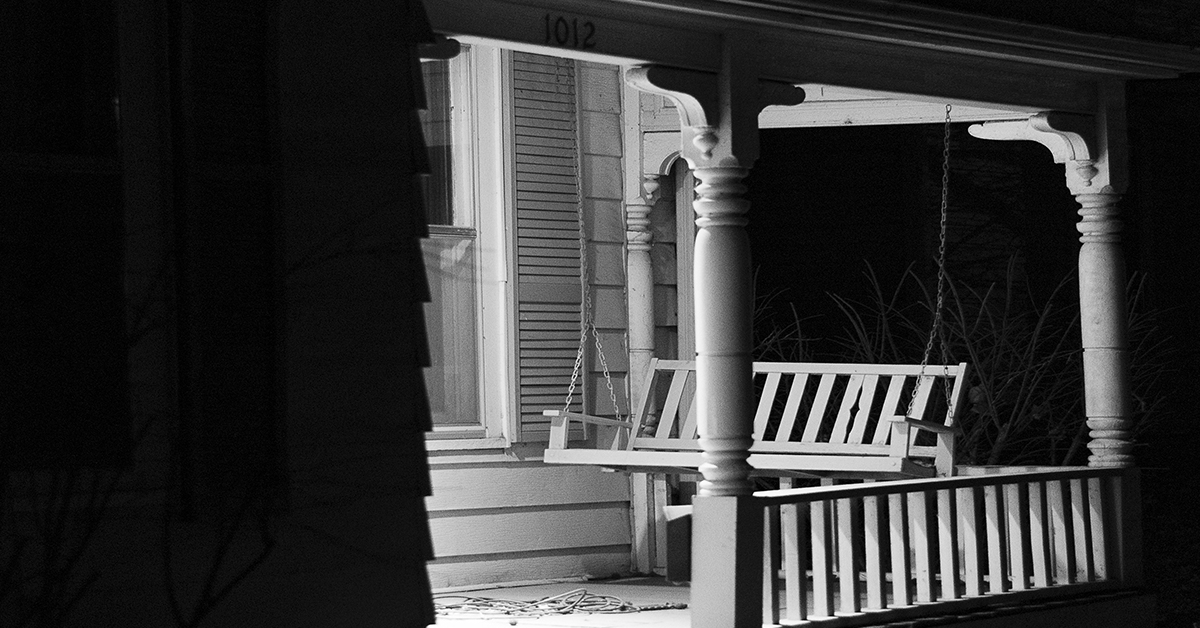 It had started off innocently enough – as grand schemes gone awry often do.  Danny sighed and Kelly shifted closer to rub his back, offering a comfortably familiar squeeze.  Where had he gone wrong, he wondered, had he just wanted it too badly? What, exactly, was he reaching for? He looked around at the other faces reflecting in the bonfire and then past them and pictured the scene as a stranger happening upon them might see it.

The ink black sky was awash with stars as the waves lapped quietly in the background.  A breeze was blowing off the lake adding a slight chill to the late summer air.  Behind them, the sprawling cottage was softly lit from within, the stark contrast of black shutters giving its windows the appearance of curious eyes gazing down. The effect was both stunning and comforting, particularly with the gently swaying swing on the wraparound porch trapped in its own spotlight.  The evidence strewn about the bonfire; the discarded plastic cups, s’mores fixin’s and crumpled, half empty chip bags, suggested that this group on blankets and in low beach chairs huddled contemplatively around the fire was once a group of merry revelers.  A now silent wireless speaker lay half buried in the sand and a keg listed dangerously to one side as the ice in its tub continued to melt.

Danny wondered what the stranger would make of this silence.  He wondered if it would seem comfortable, reflective and quiet – like a group that’s clearly been together for so long that no one feels the need to fill the silence with idle, pointless conversation.  Or if it would seem strained with the feeling that many secrets had been shared and many more were on the tips of tongues, barely restrained, as alcohol and long-simmering resentments dangerously collided. Would someone else notice that everyone was wondering if they’d gone too far, said too much – that these friendships were possibly forever changed.  Was that even true? Or was Danny’s melancholy and supposed flair for the melodramatic, as Kelly often teased, making more of this than there was.

Danny’s ears pricked up at a slight noise behind him and he turned to see a lone figure wandering up the beach towards them.  But this was no stranger. Danny sat up straighter and squinted into the darkness, causing everyone else to turn, investigating his sudden attention shift.  As Malcolm stepped back into the circle, Danny found himself anxiously tense up.

“I warned you about making this your “Big Chill” moment, Danny.  But I changed my mind about one thing – I think Jack should be the one who offs himself.”  With that, Malcolm broke into a sly grin and kicked sand in Jack’s direction.  Jack immediately threw his half-empty solo cup back at Malcolm with a chuckled “fuck you, dude” and the bubble of tension that had been hovering over them dissipated with an almost audible pop.

After a few more beers and some intentionally light-hearted chatter aimed at bringing back the merry reveling of earlier, they all began preparations to call it a night. Bill jokingly played Semisonic’s ‘Closing Time’ as they started to clean up. Ted and Jack dumped the ice and dragged what was left of the keg back towards the cottage.  Michelle, Barb and Suzanne gathered up what was left of their “feast” and some of the blankets. Danny started to get up but then heard the closing line of the song, “Every new beginning comes with some other beginning’s end.”  He sucked in a deep breath and sat back down heavily. Both Kelly and Malcolm shot him questioning looks as they folded up the chairs.

“It’s all good, guys.  I just want to stay out here a few more minutes and watch the fire die down.  Go on ahead. Just leave the lights on for me.”

They looked at him, then at each other.  Malcolm shrugged.  Kelly leaned down and kissed Danny on the temple and then brushed her lips against his ear.

“Whatever you need, Danny. Just don’t be too long, OK? It really is all good,” she whispered.

Danny turned his head to give her a quick kiss and reassuring smile as he nodded in assent.  Malcolm threw his arm around Kelly’s shoulders and gave her a quick squeeze as she straightened up.  Danny watched wistfully as his best friend and his wife trudged back through the sand together. Malcolm turned once and threw Danny a wink over his shoulder.  Danny tipped his head in acknowledgement.  Finally, they disappeared into the shadows beyond the fire’s sphere along with the others and he was alone.

He stirred the fire and threw on a few more small logs, not ready for his night to end.  He wanted to process these conflicting feelings of loss and longing that had lodged in his gut before they faded into the night, another sensory memory just out of reach, as was so often the case these days.  After sleeping off all this beer, he was sure to be at least slightly hung over and discombobulated trying to wrap up the weekend. He knew he’d never fully recapture this moment.  Even sitting here, alone and focused, he was having trouble putting his finger on what he was feeling and exactly what had happened to start what felt like a seismic shift within the group and, more hauntingly, within himself. He decided to start at the beginning and watch it in his mind’s eye like he’d re-watch a favorite movie. Since he knew how it ended, he could try to focus more on the details to see where exactly it had all gone off the tracks.